Dr Strangebrew or: How I Learned to Stop Worrying and Love £15 a pint Norwegian craft beers
So we all know the cliché – Norwegian beer costs a bloody fortune and if you are a serious beer drinker, you’d best have a king’s ransom in tow in order to enjoy yourself like you would at home.
And folks, having spent a week on holiday there, it’s entirely true.
My job, having spent an amount of money that means my wife now says it’s best I don’t see the credit card bill, is to guide future Nordic beer travellers and help them navigate the pratfalls and pitfalls of drinking in this wonderful country.
Tip 1 – Be prepared (mentally)
If you are on a budget, be realistic about how many beers you can afford if you are drinking out. For example the cheapest third available at Oslo’s RØØR bar (the premier venue for craft beer choice in the city) in January 2020 was 62kr. At current exchange rates that’s about £5.20. At that price you’ll burn through a ton without even bothering the higher end of things. Off-sales are split. Beers up to and including 4.7% abv are available in supermarkets; anything above that must be purchased at a Vinmonopolet, the Norwegian state offy. Beware that the Vinmonopolet has restricted opening hours.
Tip 2 – Price usually signifies quality
Almost all Norwegian craft brewers understand the wallet pain that drinking their product can cause, and therefore are rarely in the habit of passing off sub-standard or shoddy beer. Price indicates time, quality and brewing cost in a way that sometimes doesn’t happen in the UK.
Tip 3 – Tasters are a rare treat
Due to the way the Norwegian taxman operates, all beer sold must be accounted for. Therefore a lot of places don’t offer tasters or, if they do, it’ll be a few drops.
Tip 4 – Sharing is caring (about your cash)
If you’re travelling with other beery companions, put any squeamishness about trying other people’s beers aside and dive in. Share the wealth and find the best brews quicker. Flights (which are called 'planks' here, 'flights' are what happen at the airport as far as Norwegians are concerned) are also often available in bars, though often not obviously advertised.
Tip 5 – Brewpubs are cheaper, but refer to Tip 2
I tried half a dozen or so brewpubs and to be honest the quality wasn’t that brilliant in most cases (with a couple of honourable exceptions). By all means try one for a tick but don’t think you’re being clever by drinking exclusively in them to save cash and that you’re getting a comparable experience to drinking more commercial scale products in regular craft bars.
Tip 6 – Card machines are weird in Norway
Bar staff will put in the total on the card machine but often you will also need to re-enter the total yourself (which does give you the option to tip if you wish) before you tap.
Tip 7 – Untappd is your friend
Got a smartphone? Download Untappd and use it to research the beers before you buy. Whilst it certainly isn’t foolproof it often gives you a fair indicator of whether you’re likely to get a great taste experience for your cash.
Tip 8 – Bar service is the norm
And make sure you try a bit of Norwegian lingo when you can, staff will appreciate the effort and will be more willing to give you an exemplary Tip 9.
Tip 9 – If in doubt, ask
Unless it’s Saturday night and the bar is rammed, most Norwegian bar staff are more than happy to help you navigate the beers available if you smile and ask nicely. Spoken English is often impeccable and there remains a great affinity for the British - so you’ll often be engaged in conversation anyway, whether you’re asking about beer or not!
Tip 10 – Know what the Norwegians are best at brewing
This is my final – and I think most important – Norway craft beer tip. Great beer in Norway costs good money. You want to get the best, so why pay three times the price for beer that tastes the same as it does back in UK? You need to hit the rich seams. There are two solid options;


Bonus tips!
Find below a list of bars and breweries that really impressed me during my visit. It isn’t exhaustive, just what I visited, drank and would thoroughly recommend. 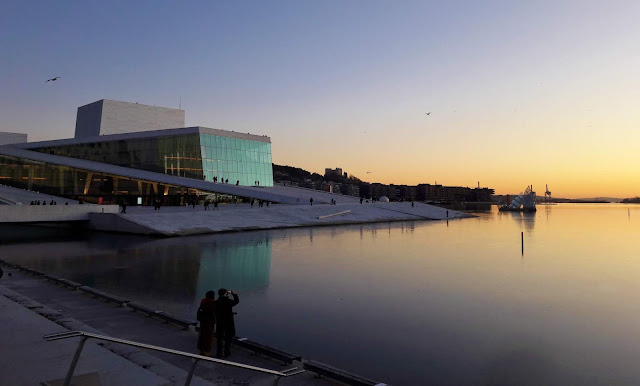 RØØR (Rosenkrantzgate 4)
The most comprehensive tap list in Norway - 71 of them!! Immaculately kept shuffleboards upstairs.

Hopyard (Mathallen Oslo Maridalsveien 17a)
A bar in the covered market with an eclectic selection, run by a bubbly and extremely knowledgeable young lady.

Café Laundromat (Underhaugsveien 2)
A local coffee shop, bar, restaurant and clothes washing facility. And it happens to offer one of the better beer selections in Oslo. I ate here and can recommend the food too.

Grünerløkka Brygghus (Thorvald Meyers Gate 30B)
Friendly backstreet brewpub with a British style atmosphere. And their Løkka Tropicana beer is to die for.

Pingvinen (Vaskerelven 14)
Small and intimate bar and diner. The food is Norwegian ‘what granny makes’ comfort fodder and comes highly recommended by me. It is really popular, so come early to bag a seat.

Henrik Øl og Vinstove (Engen 10)
A discreet doorway and a flight of stairs leads to a basic and uncomplicated bar with 54 taps. All beer available in thirds.

Apollon (Nygårdsgaten 2a)
A fun little venue which is half record shop and half bar. Not many seats, so try and visit off-peak.

Den Gode Nabo (Øvre Bakklandet 66)
Housed in a centuries old wooden building on the iconic riverfront in the old town, this is a feast for those who love history and quirky hostelries. The beer list ain't bad either! 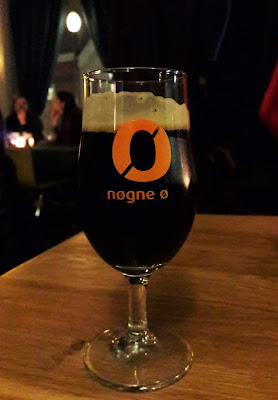 Nøgne Ø
One of the few Norwegian brewers to get their products over to the UK in decent quantity, you can’t go wrong with any of their beers in any style. Their Gale Force Imperial Stout and Porter are world class dark beers.

Cervisiam
A cuckoo brewer who make the most amazing beers – if you like big taste, this is the one for you. Their Bourbon & Rye Barrel Aged Pecanisher was a ‘tell your kids about it’ beer, a Top 10 in my lifetime beer. It was that good. 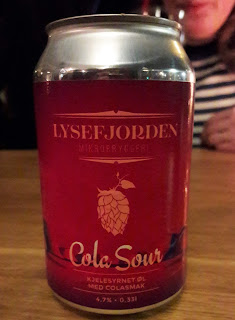 Lysefjorden
The brewer makes his own cola. He decided to try making a sour beer with it – the result is incredible (always available at Pingvinen, Bergen). So good I went back a second day and had it again.

Drum Brew
For their Gulrot Gose, made with Norwegian carrots. Tasted like nothing I’ve had before and if it hadn’t have been for time at the bar, I would have had another!


Found in most craft bars, they were a new brewery to me when I arrived in Norway and I left having enjoyed a good number of their brews which are consistently high quality.

Posted by TimOfNewbury at 9:04 AM