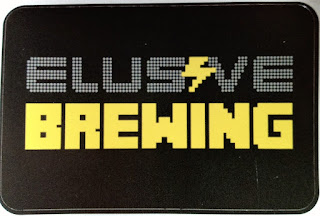 On Tuesday 23 February 2016, Andy Parker visited the Cow & Cask micropub in Newbury to give a talk about Elusive Brewing. He brought three 5 litre mini-casks of prototype beers for his audience to taste at the event. 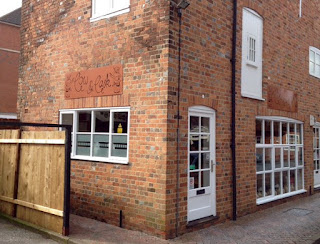 Landlord, Ian Batho, greeted Andy on arrival shortly before 5pm opening time and posed for a photo once the casks had been placed on a shelf to settle, before the event's start at 7.30pm.
There was time to visit Inn At Home beer bottle shop in Bartholomew Street, The Lock Stock & Barrel pub beside the River Kennet and the Catherine Wheel pub near the Market Square before returning to the Cow & Cask which was filling with beer enthusiasts by this point. To avoid overcrowding only twenty places were made available for advance booking.
Jugs were filled with beer from the first mini-cask and these were distributed to tables so that everyone could have about 1/3 pint. Tim Thomas then introduced Andy Parker to the audience.
Talking about his new brewery premises in Finchampstead, Berkshire, he mentioned that the unit is only about 50 yards from Siren Craft Brew on the same industrial estate.
He described the smoked ruby mild which had been poured as a baby version of Sarah Hughes Dark Ruby Mild but with a twist. The twist is that 25% of the malt had been smoked over cherry wood. This adds some fruity smokiness to a beer that is relatively weak (3.7% ABV). The beer is called Cherrywood Road, which is also the home of Farnborough Town FC, Andy's home town. Andy invited comments from the audience about the beer and mentioned that Cherrywood Road is intended to be more subtle in its smokiness than a German Rauchbier. 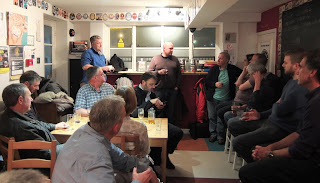 Andy said he started brewing about four years ago. He was encouraged to visit a brewery after seeing a tweet by Lovibonds brewer Jeff Rosenmeier suggesting buying beer from a brewery instead of from a supermarket. Andy visited Crondall brewery where he met David and Chrissy Taraszek who had started the brewery after taking early retirement from an IT job. He later learned that David and Jeff had been on the same Brewlab course in Sunderland. Andy found it inspirational that David had developed from a home brewer into owning his own brewery and Andy has now followed the same path. 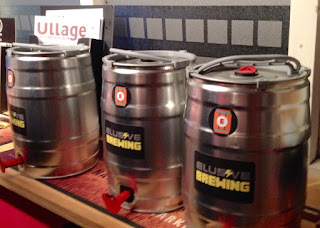 Jugs of the next beer were handed around as Andy moved on to talk about its origin - as a beer to be served after the wedding of friends Damian and Vanessa, as their guests travelled by bus to the reception venue in central London. The original name D & V Pale Ale will be changed before the beer is brewed commercially after a doctor pointed out a negative connection to a medical abbreviation! Andy assured us that drinking his beer was unlikely to have any negative effects!
The 4.8% ABV English Pale Ale is dosed with natural apricot fruit flavouring before being casked. The strength may be changed to 4.5% ABV when brewed commercially. The golden colour is due to the use of a small amount of crystal malt in the recipe. 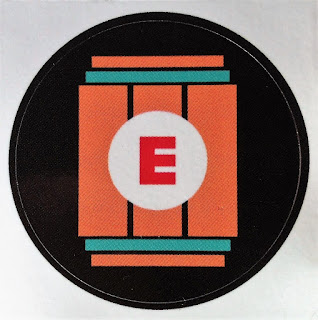 While the final beer was being poured into jugs, Andy talked about the marketing side of Elusive Brewing and gave out some brewery stickers. Andy was born in the early 1970s and grew up playing early video games. The simple 8-bit graphics of those games have been adopted in branding. Lord Nelson, a previous beer brewed in collaboration with Weird Beard also uses 8-bit graphics for the beer bottle label. 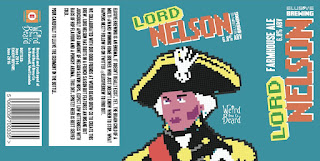 Andy said similar graphics would be used for Elusive Brewing beers including Level Up, the third beer to be sampled. Level up will be the name for the brewery's flagship beer and is taken from video games and also refers to Andy moving up a level from home brewing to commercial brewing.
In fact it was this beer, originally brewed with Citra and Simcoe hops, that won Andy the title of National Homebewing champion in February 2014, a £5000 prize which he put towards the purchase of brewery kit and the chance to brew his American Red IPA with Dark Star Brewing Co.
The prototype version of Level Up from the third mini-cask is a 5.8% ABV American Red IPA brewed with Mosaic and Equinox hops from the USA. Six malts were used to give the beer its red hue and 'a little bit of sweetness'. The Mosaic hops were used during the boil stage and the Equinox hops were dry hopped in the fermenter later to give aroma. Gooseberry, melon and citrus fruit aroma and flavours were noted for this version of Level Up. Andy will rotate the hops used when brewing Level Up due to some hops becoming unavailable and also for the sake of variety. Versions will be numbered eg Level Up 2 and the hops used will be shown on the pump clip.
Level Up will be available in cask, keg and bottle. When bottling beers will be bottle conditioned. For cask, a lower strength e.g. 5.2% ABV may be adopted providing the characteristic body and richness of the beer can be retained. 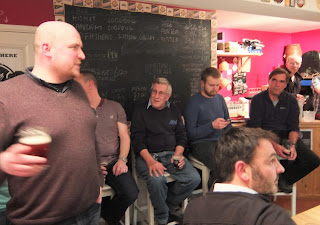 With other brewers present in the audience, including Kevin Brady of Indigenous Brewery, Andy went a bit technical and described how the American yeast used for Level Up was different from the English yeast used for the other two beers in terms of attenuation and floculation.
Questions from the audience afterwards included the reason for the shortage of Citra hops and the size of the Elusive brewery. Andy explained that his brewery, from Elite Stainless Fabrications of Swindon was 5 brewers barrel (BBL) size and slightly smaller than Longdog Brewery, Basingstoke, where a 6 BBL plant was obtained from the same source. The Elusive Brewery unit (600 square feet) is smaller than the Longdog Brewery unit so Andy can only fit a maximum of three fermenters and there is no room for an office or packaged beer storage.
Ending his talk, Andy encouraged patrons to have another beer from the casks tapped behind the bar including two from Longdog Brewery - Kismet and a personal favourite of his - Lamplight Porter. The audience applauded Andy and Ian was soon busy serving beers from the bar.

After deduction of venue and travel expenses, the West Berkshire CAMRA supported event raised £31.50 for West Berkshire Mencap as Andy provided his time and prototype beers at no cost.

Posted by TimOfNewbury at 11:47 AM